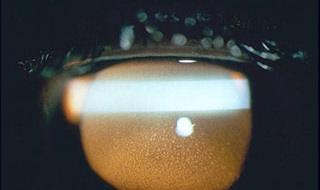 The uvea, which means grape in old Greek, is the darkly colored, blood rich part of the eye. The uvea includes the choroid (a spongy blood filled layer which is between the retina and the sclera, the ciliary body (which produces the fluid which fills the eye), and the iris (the brown or blue part of the eye). The suffix “itis” refers to inflammation, therefore uveitis implies inflammation of the uvea. If only the iris is involved, the inflammation is commonly called iritis, if both the iris and ciliary body are involved, the term is iridocyclitis. Persons afflicted with uveitis often experience pain and sensitivity to bright light, blurred vision, and redness of the eye.

Uveitis may be caused by a traumatic injury to the eye, or by infection inside the eye (e.g. herpes or tuberculosis), but most commonly uveitis is caused by an autoimmune process. Autoimmunity is a disease process where the body misidentifies part of itself and “attacks” this misidentified part as foreign. The “attack” takes the form of white blood cells and inflammatory substances which react as if the tissue they are attacking doesn’t belong and needs to be removed or walled-off. The uvea is a part of the body more frequently misidentified in this way than other parts of the body. Some autoimmune diseases affect only the eye (e.g. pars planitis and birdshot chorioretinitis). Others affect the eye and may or may not affect other parts of the body at the same time (e.g. sarcoidosis, juvenile rheumatoid arthritis, Behçet’s disease, and Vogt-Koyanagi-Harada syndrome).

What does uveitis do to the eye?

The inflammation caused by uveitis if uncontrolled and untreated can lead to severe loss of vision and even the loss of the eye. The inflammation and the body’s response to the inflammation, may lead to cataracts, glaucoma, macular edema (retinal swelling), and or hypotony (loss of eye pressure).