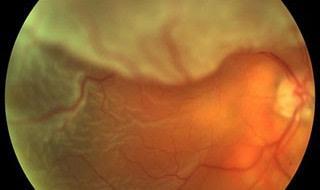 What is a retinal detachment?

How are retinal detachments repaired?

A scleral buckle is made of a piece of silicone (solid or sponge) which is sewn to the outer wall of the eye called the sclera. The scleral buckle was developed in the early 1960’s and was the first highly effective treatment for the repair of retinal detachments. Scleral buckles are still used today either alone or in conjunction with other methods of retinal detachment repair. The mechanism of action of the scleral buckle is to indent the wall of the eye toward the detached retina. This indentation alters the fluid dynamics within the eye such that the liquefied vitreous no longer passes through the retinal tear, thus effectively closing the hole. Once the hole is closed, the fluid is absorbed by the natural mechanisms of the eye. Sometimes, if there is quite a bit of fluid under the retina, the retinal surgeon will find it necessary to drain the fluid under the retina at the time of the surgery by making a small incision through the wall of the eye (“external drainage”). Once the fluid under the retina is gone, a permanent seal is made around the responsible retinal tear by the action of either a cryoprobe or laser used at the time of the surgery (similar in action to the treatment of simple retinal tears as described above).

Vitrectomy for the repair of retinal detachments

Vitrectomy is a sophisticated technique of operating upon the retina from inside the eye. During a vitrectomy, small incisions are made in the wall of the eye, through which various instruments are passed. Typically, there are three incisions. One is for the infusion of fluid into the eye. A second is for insertion of a fiberoptic light source. A third is for the insertion of a working instrument such as a micro-scissor, forceps, knife, or vitrector. The vitrector is the primary working instrument and it combines a guillotine style chopping mouth, with vacuum-like suction. The vitrector is used to remove the sticky vitreous gel without causing undue traction upon the fragile retinal tissue. Vitrectomy techniques have advanced rapidly over the past 20 years allowing for increasingly more complex retinal problems to be addressed with increasing safety. Recent advances in vitrectomy techniques include: 1. The use of picks and forceps attached to the end of the fiberoptic light source allowing for a controlled “two-handed” approach to the dissection of delicate tissues. 2. The use of sophisticated “Wide-angle” optics, which allow a view of nearly the entire posterior cavity of the eye in one field. This allows superior orientation for the surgeon. 3. The use of long acting gases and silicone oil for internal tamponade of retinal pathology 4. The use of heavy liquids intra-operatively to gently manipulate the retinal tissue and to displace subretinal fluid. 5. The use of narrow gauge instruments that can be inserted the eye wall without an incision and close without the use of sutures.

Office based repair of retinal detachments are now available to repair many uncomplicated retinal detachments in the office, thus saving a trip to the hospital. These techniques when performed on carefully selected types of retinal detachments have been shown in several studies to have the same or nearly the same success rate as traditional hospital based surgery. In addition, if the office-based repair is unsuccessful, it has been shown that no ground is lost when a second procedure needs to be performed. The most popular in office technique, is discussed below.

Pneumatic retinopexy for the repair of retinal detachments

The word pneumatic refers to the use of a gas. In a pneumatic retinopexy, a long acting gas is injected into the eye to create a blockage of flow of fluid through the retinal tear. These gases may stay in the eye for 1 to 4 weeks, during which time they slowly dissipate, until they eventually disappear. With the tear in the retina thus closed by this “air-lock”, the fluid underneath the retina will absorb by natural mechanisms in a few days. The cryoprobe used at the same time as the gas injection, or laser used after the retina is already “flattened” creates the adhesion that keeps the tear closed once the gas has disappeared. A pneumatic retinopexy not only saves a trip to the hospital, but also is less invasive than hospital based retinal detachment repairs and allows for a faster recovery. While the gas is in the eye, it rises like a helium balloon. In order to keep the air lock over the retinal tear, it is then important for the patient to hold his or her head in the proper position for 1 to 2 weeks. In addition, while the gas is in the eye, the patient is unable to travel in an airplane because a sudden depressurization of the airplane’s cabin could lead to dangerous expansion of the gas bubble inside the eye. These inconveniences aside, a pneumatic retinopexy in the office, when indicated, is usually preferable to hospital based surgery.

Tractional detachments by definition have a component of fibrous scar tissue that pulls the retina off the wall of the eye. Tractional detachments, such as those that occur in diabetic retinopathy are best treated with modern vitrectomy techniques to carefully dissect, peel, and/or remove the scar tissue forming the traction. Sometimes a scleral buckle is necessary as well in order to create “slack” in the tractional bands by indenting the wall of the eye in. Scleral buckles are also used when a tractional band pulls so hard that the retina is torn, thus creating a combined tractional and rhegmatogenous retinal detachment.

Serous (exudative) detachments are treated by treating the underlying cause of the fluid that is being produced to elevate the retina. In the case of an inflammatory condition, anti-inflammatory medicines such as steroids can be used to reduce and resolve the fluid. In the case of a tumor, laser and or radiation is often used to attack the tumor, make it shrink, and in the process treat the serous detachment by reducing the fluid produced by the tumor.