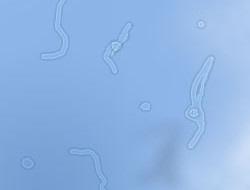 Floaters are small clumps of cells, pigment, and or gel matrix which “float” inside the central cavity of the eye that is filled with a gel-like substance called the vitreous humor. Floaters may appear as small specks or clouds moving in front of your vision. They are especially apparent when looking at a plain white background, or looking at a brightly illuminated sky. Floaters often appear as if they are floating in front of the eye, and sometimes imitate a swarm of small insects. In actuality they “float” entirely inside the eye, and typically move when you attempt to look at them. Floaters are usually quite small, and what you actually see are the shadows cast upon the retina and nerve fiber layer. Floaters that you have noticed or been aware of for some time are typically benign; however, a “shower” of new floaters may indicate there has been a new retinal tear, a new vitreous hemorrhage, a posterior vitreous detachment, or that there is inflammation in the eye (uveitis). A “shower” of new floaters is a problem that requires prompt attention and you should see your eye doctor immediately.

What is the treatment of floaters?

Typical floaters are not usually treated. If the floaters have been caused by a posterior vitreous detachment without a retinal tear, the floaters will typically “settle” out of the line of vision over several weeks to months. Severe floaters caused by a vitreous hemorrhage that do not clear after several months and prevents useful vision can be removed surgically by a pars plana vitrectomy.

Flashes are the experience of brief sensations that appear to be bright lights at the edge of vision. Flashes are usually noticed all the way to one side and are more prominent in the dark or when going from a well-lighted area to a darker area. Usually the flashes have no specific shape, but can sometimes have the appearance of lightning bolts. The experience of flashing lights, especially in conjunction with new floaters, can be an indication of a posterior vitreous detachment, retinal tear, or a retinal detachment. The flashing lights represent the release of an electrical signal from the nerve tissue of the retina when there is pulling on the retina from a vitreous gel that is separating from the retina. If the pulling is especially strong, or at the site of a weakness in the retinal tissue, a retinal tear may occur. Any experience of new flashes should be reported to your ophthalmologist and a prompt dilated exam of the retina will usually be performed.

Some flashing light phenomena involve the experience of a very distinct; often multicolored or fiery jagged line of light with or without an adjacent black spot in the vision. Such “fortification scotomas” may start in the center of vision and then spread to the side, or start at the side in the first place. Often, if you carefully close one eye and then the other, you will notice that the flashes are actually going on in both eyes, but are just more prominent in one or the other. This type of flashing light typically lasts from 5 to 30 minutes, and may or may not be followed by a bad headache. These flashing lights are different from the flashing lights from tugging on the retina described above, and represent the eye portion of a migraine (with or without a migraine headache). This type of flashing lights are usually not serious, but if it is the first time you are experiencing them, or you have any doubts, an ophthalmologist should be contacted.

How are flashes treated?

When a patient is experiencing new flashes, a dilated exam of the eye with a careful assessment of the far peripheral edge of the retina is indicated. It is at the very edge of the retina, which is thinner than the more central part of the retina, where most retinal tears occur. Often a device called a scleral depressor is used to gently indent the side of the eyeball in order to bring the peripheral edge of the retina into better view. If no retinal tear or retinal detachment is found, then no treatment is usually indicated. However, after the initial exam, careful observation of the world around you with one eye at a time, is helpful to screen yourself for new symptoms such as increased floaters, new or increased flashes or flash intensity, or a shadow. If any of these additional symptoms occur, you need to return to your ophthalmologist for a repeat dilated exam, immediately.