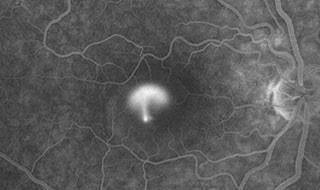 Central serous chorioretinopathy is a condition mostly affecting middle-aged males. Stress, “type A personalities”, and increased stress hormones are thought to play a role. In this disorder a small amount of fluid leaks through a barrier layer of cells lining the underside of the retina (RPE – retinal pigment epithelial cells) causing ‘blister-like’ elevations of the retina. This leads to an accumulation of fluid underneath the retina that may affect one’s central vision. Symptoms include distortion (metamorphopsias), the false appearance that objects appear smaller than they really are (micropsia), a distinct round area of blurring or darkness (scotoma), among others. A thorough history, examination, and diagnostic testing is needed to rule out other causes of this fluid development. If possible, it is usually advisable to stop all steroid containing medications such as prescription skin creams, prescription nasal inhalers, steroid joint injections, etc. Usually no treatment is necessary as this fluid can resolve on its own. But, occasionally laser therapy (thermal photocoagulation or photodynamic therapy) may be indicated if the fluid does not go away as in a recurrent or chronic form of CSCR.