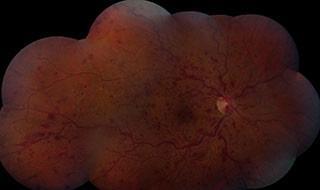 Central retinal vein occlusion can affect vision through a number of mechanisms. Poor blood flow (ischemia) through the center of the retina (macula) can severely decrease vision. Additionally, exudation and bleeding from the capillaries can cause swelling in the macula (macular edema) resulting in visual loss. Poor blood flow can also lead to development of abnormal new vessels (neovascularization) not only on the retina but also in the front part of the eye (rubeosis iridis). These new vessels can lead to development of bleeding in the eye (vitreous hemorrhage) and/or increased eye pressure (neovascular glaucoma). Rarely, scar tissue can form on the surface of the macula causing macular pucker formation. Another rare complication is the development of retinal detachment.

Are there different types of central vein occlusion?

Who is at risk of developing central retinal vein occlusion?

What is the risk to the other eye?

The diagnosis of central retinal vein occlusion can easily be made on clinical examination. However, in the first three to six months following central vein occlusion, significant retinal hemorrhages can make it difficult to predict the clinical course and visual outcome. In general, the better the vision is at the time of diagnosis, better is the visual prognosis. A fluorescein angiogram is usually performed and is helpful in determining whether the central retinal vein occlusion is ischmeic or non-ischemic. Ocular coherence tomography (OCT) is also often performed to evaluate and quantitate the amount of macular edema. Laser treatment, in general, is not effective for macular edema from central retinal vein occlusion. However, it may be helpful in patients who are younger than 65 years of age. If abnormal new vessels (neovascularization) develop, laser treatment is indicated to cause regression of these abnormal vessels. For persistent vitreous hemorrhage, retinal detachment or macular pucker formation, surgery might be indicated.

Injection into the eye of a small amount of steroid (Intravitreal Kenalog) or anti-VEGF medications has been shown to reduce the macular edema of central vein occlusions, improve vision, and have become increasingly popular among retinal specialists. The effect is often temporary and repeat injections may need to be performed. Surgical techniques of repair are also being investigated. These two treatments are promising and may be used in combination.