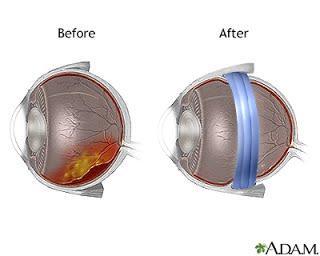 Scleral buckling is commonly used either alone, or in conjunction with pars plana vitrectomy, to repair a retinal detachment. A soft silicone “rubber band” like material is sutured against the sclera, or white part of the eye. Acting like a waistbelt, it indents the wall of the eye relieving “traction” allowing the retina to flatten out and return to its normal position lining the back of the eye. Cryotherapy is also usually performed to permanently seal the retinal tear or hole to prevent fluid migration under the retina causing further detachment. Fluid that has already tracked underneath the retina is either removed at the time of surgery or may be left in place to resorb on its own over time. Sometimes, a gas bubble may be placed inside the eye as well to aid in retinal re-attachment. Scleral buckling is usually performed under local anesthesia in the operating room. Most patients return home shortly after the surgery with a follow up appointment the following day.